Is network marketing a pyramid or snowball system?

When it comes to the topic of network marketing, the terms pyramid scheme or snowball system come up again and again. What is the reason for this? Networkers are still confronted with this comparison, especially when approaching new partners or in their personal environment. But the comparison is misleading, because the differences are more than clear.

To answer this clearly and unequivocally in advance: No, network marketing has nothing to do with a pyramid scheme or a sham. The explanation or evidence is very simple:

Why is this constantly being confused?

Structure of a network marketing distribution

In principle, a network marketing distribution is nothing different from any other distribution. The only difference is that the names may be slightly different. In a regular sales department, for example, there is a sales manager. Regional managers are subordinate to him, and local managers are subordinate to them. It is not unusual, even innormal companies, for the respective managers to earn commission on the sales of their subordinate managers, regions or salespersons.

In a network marketing company, this structure is usually divided into levels:

– Level 1 receives its own commission as well as commissions from levels 2,3 and 4.

– Level 2 receives its own commission as well as commissions from levels 3 and 4.

– Level 3 receives its own commission as well as commissions from level 4.

This structure is no different from an ordinary sales structure: level 1 is the sales manager, level 2 the country manager, level 3 the regional manager and level 4 the local manager. Since this structure naturally creates a pyramidal structure, network marketing is often mistakenly confused with pyramid systems.

What characterises a network marketing distribution?

As in any company, probably everyone who works in sales wants to be a sales manager! Whereas in most companies there is usually only one sales manager, in network marketing practically anyone can become a sales manager. The way to become a sales manager is simple: you build your own structure, i.e. your own sales department. This is the so-called downline. This is done by not only selling products oneself, but by recruiting people who also become salespeople, or rather representatives.

By building your own downline, you not only become the sales manager of your own sales force, but there is another effect that makes network marketing a unique profession: passive income.

What is passive income?

Passive income arises automatically when you build up a downline. Every time a sale is made in your downline, you earn a commission. It is passive because you don’t have to do anythingfor it! To put it better: the income is generated without you having sold anything yourself.

If you build up a relatively large downline, you will eventually earn so much passive income that – depending on the size of the downline – you will no longer need to sell yourself. The job then becomes more of a management position, because it is then a matter of managing one’s own downline. That is why every networker wants to build up as large a downline as possible in order to generate a corresponding passive income.

The fact is, however, that products are always sold or money exchanged for goods. This is an essential distinguishing feature, because in a pyramid or Ponzi scheme, as I said, no goods are sold.

What characterises a pyramid or Ponzi scheme?

Pyramid or Ponzi schemes are built on the same principle as any other distribution. However, no goods are traded. This means that the entire organisation or structure is financed by the money brought in by new members. To put it more precisely: the commissions are paid from the money that new members pay in. This in turn means that new members have to be recruited permanently to keep the system running.

No value is created or income generated, as the company practically only collects and distributes money. In contrast to network marketing, where the aim is to build up as large a customer base as possible in order to then sell products in the long term, pyramid schemes are only about getting as many people as possible into the system in order to receive money without receiving anything in returnfrom them. Commissions are then paid out from this fresh money. In the industry, this is often called a bounty.

Why the comparison network marketing – pyramid / Ponzi scheme is lame?

The reaction is understandable, but it must be clarified at this point: there are of course companies that pretend to be network marketing companies and also sell products. However, they allow so many levels in their sales that at some point 50 € in commission accrue for a 10 € product. Of course, this cannot work. These companies represent a hybrid form: on the one hand, they are network companies that sell products, but on the other hand, they are pyramid systems, as they can no longer pay the commissions from earned revenues once they reach a certain sales depth. Such systems, like pyramid or sham systems, are doomed to failure.

Prof. Dr. Florian Kraus, who conducts an annualstudy on direct selling on behalf of the BDD (Bundesverband Direktvertrieb Deutschland– Federal Association of Direct Selling in Germany) confirms that there are black sheep in the industry, as in every industry. However, the comparison of network companies with pyramid or snowball systems is problematic, since network marketing is a completely legitimate and legal form of distribution. Incidentally, this has already been confirmed in countless court rulings. Pyramids or pyramid schemes, on the other hand, are illegal by law in Germany.

In fact, the main reason for the permanent confusion of facts is the fact that network marketing distributors have a pyramid structure. A pyramidal hierarchy is nothing bad in itself and can be found in almost every company. Apart from that, however, the two systems differ in many respects.

What to look out for

Attention should be paid to two essential factors:

1. there are no products.

2. there are products, but the level depth is very large. This means that the products are disproportionately expensive in comparison.

Whereas the first case is obvious, the second is more difficult. Here a look at the compensation plan or commission plan helps. If there are too many levels, there is a danger that the products are so expensive that they no longer offer real value. For example, a tube of skin cream for 800 € can be mentioned here. Such prices result from the fact that too many levels have to be provided. In such cases, it is not necessarily a pyramid or snowball system, but an alarm signal should go off.

Another indication of reputable companies is training and education offered by the company. Even if such offers are usually associated with costs, this is an indication of seriousness. After all, it should be remembered that companies have to buy in service providers or training systems themselves, and that they pass on the costs is legitimate. What is also decisive here is that such training aims to teach people not only sales techniques etc., but also focuses in particular on personal development, so-called personality development. This includes, for example, a broad-based coaching offer.

So the distinction is relatively simple. Of course, only if you know the facts! Why the industry is constantly attacked is another question. Certainly also because many people enter the network and then believe they can make a quick buck. When success fails to materialise, the notion of a pyramid scheme is quickly brought up. Being a networker means building up your own business. This takes time and depends above all on the level of commitment.

Ask yourself the following question: if a car dealer invited you to test his new models at the weekend in the context of a joint barbecue, would you join in?

If the car dealer were to offer you the opportunity to organise a barbecue event yourself at which you could present the new models to your friends and other guests, would you take part? Of course, you would receive a commission in the event of a sale.

In other words, would you suspect a pyramid scheme here?

Network marketing has been around for hundreds of years and many large international companies use this form of distribution. Unfortunately, there are always black sheep in the network industry. As in every industry. This is also true of the media, which likes to misrepresent one fact or another in order to get a good story out of it. They often engage in network marketing themselves: they pay independent reporters to supply them with articles. It is not uncommon for these reporters to then themselves commission other reporters to deliver an article.

This is network marketing at its best!

If you are interested in becoming a networker, it is best to get in touch with people who are already working in this field and listen to their experiences. Always make sure that testemonials on the internet are from real people, e.g. with an email or a social media profile. Do not be dissuaded from your plan just because someone tells you about the dangers of a pyramid scheme! However, be thorough and conscientious in your research. Reputable companies offer no-obligation contact and initial information. Take advantage of these offers!

In the end, it remains to be said that there is hardly any profession where you can build up a solid income in a relatively short time. In times when most salaries are below the €2,000 mark and rents often consume 50% of income, it is quite an interesting option!

If you want to learn more about the possibilities of network marketing, check out our My Startup programme or simply contact us! We are always at your disposal.

Your contact person Carolin Müller is looking forward to hearing from you! 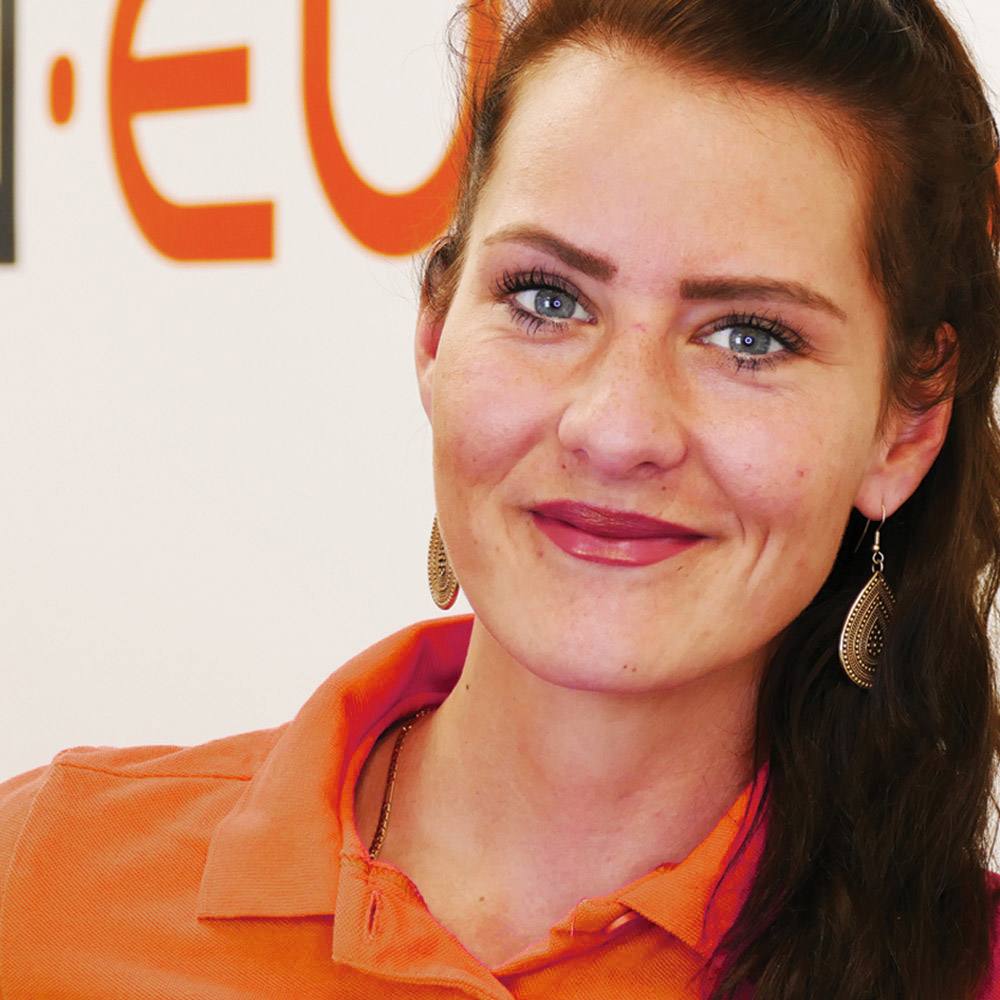